FOUNDATION DIRECTORS
The EVOKE board of directors and advisors bring a huge amount of industry experience, as well as the key relationships to effectively steer EVOKE to becoming a trusted and successful foundation serving visual artists and the community at large globally. We are currently developing an EVOKE patrons and trustee program to expand the current knowledge and key relationships on the board.

Seamus Conlan – EVOKE President – Creative Director
Seamus was named the 16th of the “100 most important people in photography” in American Photo magazine decade round for creating the 4th largest photo agency in the world- WpN, an international agency with over 5,000 media clients and with 700 photographers in 72 countries. Life Magazine honored him for having taken one of the ‘100 images that changed the world’ ‘The Lost Children of Rwanda’ after he initiated a photo tracing campaign to reunite children with their parents in Rwanda during the genocide to reunite 21,000 lost children. It later evolved into one of the largest traveling photo exhibitions in history opening at the ICP – International Center of Photography in New York and continuing onto the Museum of Tolerance in Los Angeles in a joint exhibition with celebrity photographer Mark Seliger. The exhibit continued to travel the world for many years, with coverage in hundreds of major print and broadcast media, and the process is now a standard form of tracing people in developing nations. “The Lost Children of Rwanda” was given a ‘Directors Club’ award for the use of imagery.
Seamus Conlan is a Photographer & Creative Director with over twenty years of experience in the creative world working with Media, Radio, Television and Outdoor Media, Exhibitions, Museums and Art Institutions as well as working with Advertising agencies for brand identity and full concept design from print, web and multimedia.

Jimmie Briggs – EVOKE ADVISOR
Award-winning journalist and human rights advocate Jimmie Briggs has revealed the struggles of children and youth, domestically and abroad. He has produced seminal reporting from across the globe on the lives of war-affected youth, children soldiers, and survivors of sexual violence. Briggs revealed even more in his 2005 book, Innocents Lost: When Child Soldiers Go To War, after which he was named a United Nations Goodwill Ambassador and Special Envoy to Children in Armed Conflict. A recipient of honors from the Open Society Institute, Congressional Black Caucus, Northwestern University and the Carter Center for Mental Health Journalism among others, he has written for publications such as The Washington Post, The Village Voice, LIFE magazine and numerous outlets as a freelance writer. Briggs is also the co-founder of Man Up Campaign to activate youth to stop violence against women and girls. The Man Up Campaign formally launched during the 2010 FIFA World Cup in South Africa, bringing together a diverse group of up to +100 women and men (ages 18 to 30 years) from 25 countries. For his work addressing violence against women and youth, he was selected as the winner of the 2010 GQ Magazine “Better Men Better World” Search, and is a Women’s eNews’ 21 Leader for the 21st Century. A recognized figure on the national and international lecture circuits, he speaks at middle schools and high schools, university and college campuses, and conferences, about trauma, sexual and gender-based violence against women and girls, illness, conflict and war-affected children, and youth leadership. His next book-in-progress, Blood Work, is a memoir of transformation and manhood, inspired by his own struggles following a heart attack, resulting in kidney failure. Jimmie has spoken to a wide range of audiences, from the United Nations to the Boys & Girls Club, to talk about masculinity and manhood, sexual violence, children soldiers, mental health, illness, and survivorship.

Melanie Skehar – Legal Counsel
Melanie comes to EVOKE after a long career in both entertainment and criminal law. She began her legal career as a clerk for the Honorable S. Otero in federal court where she handled all of the intellectual property cases. From there, she crafted her skills in distribution contracts at Lions Gate Studios, where she worked under Wayne Levine in business affairs. Later, Melanie was an associate at Pierce Law Group, LLP, a boutique entertainment law firm in Beverly Hills where she drafted contracts, negotiated with studios and unions, and ultimately provided litigation when needed. While at Pierce Law Group, she became the on-set legal counsel for the Mexican television show, “Jose Luis Sin Censura” (the Mexican equivalent of the Jerry Springer show). Wanting to hone her trial skills, she changed gears and joined the Orange County District Attorney’s Office and later the Santa Monica City Attorney’s Office where she tried upwards of 50 jury and bench trials in both juvenile and adult courts. For a period of time in Santa Monica, she ran “homeless court,” which was a specialized court set-up to assist the homeless population that was committing crimes by engaging with mental health service providers and rehabilitation facilities to structure a plan for each individual in order to assist him/her in getting the help he/she desperately needed instead of incarerating that individual. The results were staggering and many homeless defenents were rewarded with permanent housing in Santa Monica. Presently, Melanie is thrilled to have the opportunity to utilize her skills for a fantastic nonprofit, EVOKE, in both Los Angeles and Vancouver.

Gordon Hvolka – EVOKE Executive Producer – Video Content
Gordon Hvolka came to Pepperdine Law School in Malibu, California with ulterior motives – he wanted to get into entertainment. Growing up in Utah with a love of movies and television, he regularly attended the Sundance Film Festival and would ask advice of anyone who made their living in the business of how he should break in. Their advice led him to law school in Los Angeles, where he learned the business and legal side of “show business,” as well as opportunities to intern at some of the major studios.
After graduating Pepperdine Law, and a short stint with the Los Angeles County District Attorney’s office Holka rose through the ranks in the mailroom and as an assistant at The Firm (at the time the second largest management company, with clients like Robert DeNiro, Martin Scorsese and Leonardo DiCaprio). Hvolka then joined boutique literary agency, Kaplan Stahler Gumer Braun to work for partner Alan Braun. Through Braun’s mentorship Hvolka learned television packaging and was elevated to a literary agent, representing writers, directors, and production companies in both scripted and unscripted television. After several years, Hvolka was hired away by international talent agency ICM Partners, where he worked for six years as a television packaging agent, representing such talent as Megan Fox and Patrick Warburton and Emmy winners like All3 Media (UNDERCOVER BOSS), Zero Point Zero (ANTHONY BORDAIN: NO RESERVATIONS & PARTS UNKNOWN), and Live Animals (THE VOICE). Hvolka recently left representation to create content and platforms in digital content.

Ez Blaine – EVOKE Creative Strategy & Digital Marketing
Ez is a creative business leader with a radical mission is to build incredible experiences and brands that create lasting lifelong relationships with people. He drives business strategy through the lens of creativity and design and channels his passion for people into every project.  Ez has over 15 years of experience in the creative industry working for world-famous advertising agencies and Global consumer brands. 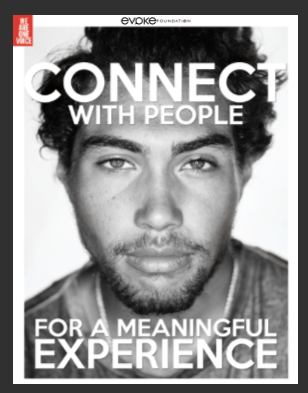